Posing for this photograph with Chainama East Correctional Facility staff, his sister and UP Zambia’s Eve Liswaniso was not as easy as it seems for Manda. Manda was released from prison but he knew that he had one big problem. How was he going to fit into a normal life after all these years? He squinted into the October sun, feeling its warmth on his exposed arms, as he rubbed his forehead. For three years he had not felt the air, the sun and the light in which the free of the earth bask! “Right now I feel like I am a bird about to fly but …,” Manda’s voice trailed off and his shoulders dropped. His sister had brought him his old clothes as his prison clothes were well worn. Close to tears, Manda’s sister remembered the years of absence.“During his absence we all felt like he was dead. His laughter was gone. His kindness was gone. We missed the times he would bring us something whenever he returned from selling on the streets. We have cried all these years and hoped one day he would come back to the family,” Manda’s sister said in the local language.How his clothes fitted on his body was the least of Manda’s worries right now. He had to think of how he was going fit into a normal societal life and to pick up the pieces of his old life. While this problem seemed big enough for Manda, UP Zambia had made tremendous progress towards making Manda’s life more bearable after his release from prison. UP Zambia had followed his case for years. To be as close as possible to him and his family, the organization was always in contact with the family. Also UP Zambia provided counselling sessions for Manda to prepare him for his release into society. The family was also counselled on how to take care of him. Eve Liswaniso had kept track of all the important dates. She had made sure he took his medication in conjunction with medical staff from the facility. Now Manda had a better chance to fit into society. Eve however always worried about one thing. “We knew he would be released one day. What we wanted to avoid was a situation where he spends needlessly long periods of time in post-trial detention, hence our continual engagement with his sister, who is exceptionality kind, loving, accepts him and is willing to assist him to get better,” Eve said later.As Eve was called in by the Officer – In – Charge to sign the release papers for Manda, the family were ecstatic but they had to be counselled by medical staff first.“Up Zambia, you are making our burden lighter. The work you are doing for these people to help us is commendable. Imagine how hard it would have been for us to help him go back home. But you contacted his family, you always checked on his progress and you are here today to see him go back home,” the Officer – In – Charge Mr Kashweka Kapalu said.6 years ago, before UP Zambia started its work in prisons, many people in Manda’s situation would be marooned and would choose to go back to a life of crime. Since the coming of UP Zambia, the situation has improved and many ex-convicts can return home to a normal life. This has drastically reduced re-offending for those cases the organization has handled.We wish Manda well in his future as he picks up his life surrounded by his loving family!

Mark embraces his father and mother who had waited five... 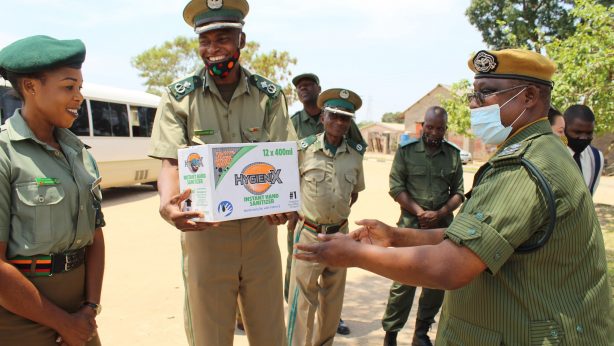